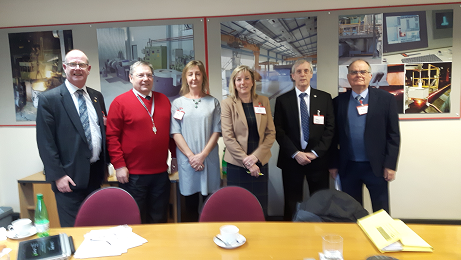 Posted on 13 March 2017 in NEWS
Stephen Hill, Managing Director of Inductotherm Europe and previous FESA President hosted last month’s council meeting at Inductotherm their European facility is based in Droitwich, Worcestershire. Held at 1pm on the 28th February a working lunch provided to all council members’ along with plenty of tea & coffee gratis of Steve Hill, mighty nice it was too.

The meeting was full of optimism for future ideas and events, it was confirmed that Chris Wilding, Sales Director at Omega Foundry Machinery is to take presidency over from Pam Murrell Chief Executive at Cast Metals Federation and current FESA president in October 2017.
After numerous years, it was sad news to hear that Laurie Palmer, Managing Director at Metalscan Limited retired from FESA as a director; Laurie was also a past president of FESA and will be greatly missed.

We look forward to seeing you all at the Next FESA Council Meeting scheduled to take place on July 4th, venue and time to be confirmed.