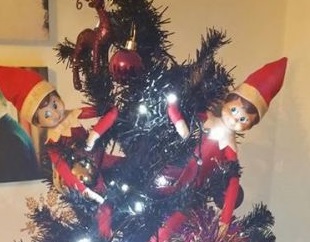 That’s right those pesky elves are back!

Sparkly & Toggle arrived in the tree and have been up to all sorts already!

Firstly, they gave the children a Nutcracker as they only had one and didn’t want him to be lonely!

Then Toggle wrapped sparkle up in tissue and thought it was funny!

Let’s hope they aren’t too naughty this year – On the plus side the children are behaving impeccably as they are being watched by their elves!

Keep watching to see what else they get up too …