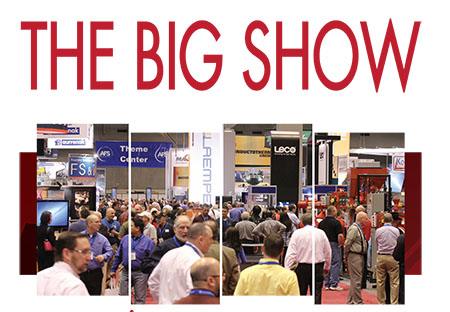 Posted on 19 April 2016 in Past Exhibitions
CastExpo brings together casting suppliers, metalcasters, and casting buyers together for four packed days of demonstrations, discussions, meetings, workshops and displays and of course the odd Iron man...

The pros from Dover…

Minnesota, the land of 10,000 lakes and home to the twin cities of Minneapolis and Saint Paul, hence, the name of the professional baseball team of the “Twins”, was the backdrop of the 2016 AFS Modern Casting CastExpo2016.  I personally never realized how prominent the mighty Mississippi river is to the area and the actual head waters are located in the northern part of the state.  In the dugout representing Team SYNCHRO ERP were Chris Collins, Managing Director & CEO, Simon Adlington, Global Implementation Manager, Daniel Alcântara, Training & Implementation Manager, and myself Shane Allen, Head of North American Operations.

The Sales and Marketing Director Barbara Nolan Collins and Marketing Project Manager Bianca Catherall hit the first home run with insuring that all of the booth furnishings were ordered and delivered to the show correctly and on-time.  Trust me, this is no small feat.  With a show of this magnitude and with very limited time once the team arrives, no foul balls are allowed with this important endeavor and there is no time for extra innings.

The show was a grand slam success as we had many designated hitters, our customers, visit us on the booth to round the bases learning about the new CRM module and swinging for the fence with the latest release of the APP.   The crowd gave many standing ovations with so many new metalcasters coming in from the bullpen to learn what the software is all about with on booth demonstrations and why they must get the software installed pronto!  Castexpo is always a triple play in that it is so multicultural with metalcasters visiting from far off lands.  I met my first metalcaster from Guiana at this show and actually it was the first person I have ever shaken hands with from Guiana South America.

There were no on-base errors during the show because of the dedicated support team throwing out the batters of Lee Mahon, Jean-Marie Darchicourt, and Jon Mapp kept all the ground balls from getting into the outfield with the legendary support that SYNCHRO ERP is known for.

Vicki Mahon did such a great job in the booth announcing the CastExpo game through social media that there was no time for a 7th inning stretch as we were constantly inundated with sales leads and customers.   Linda Beckett in the field house was at the ready to process quotes and credit card orders should the game go into extra innings.

The final pitch of the game was a strike when I got to meet up with a metalcasting supplier and gentleman, perhaps my long lost older brother that was wearing the only other bowler “derby” hat in all of CastExpo.  Some players wear baseball hats onto the field, I prefer my trademark bowler hat which is a fitting tribute to my English heritage.

Well, until next time, see you on down the road…